While most of our performances are low key affairs, and fundraisers for local charities, occasionally we have the opportunity to perform on a bigger stage. Below are some of our past highlights

On Tuesday 21st May, the choir joined the  Garda band in Hotel Kilmore, in front of a packed audience. This performance was to raise funds for Cavan Alzheimer’s Support Group.

On the 14th March 2019 the Choir embarked on a trip to Wales to coincide  with the Rugby International between Wales and Ireland. No performances were planned, rather a few days of cheoil agus craic, was what we envisaged. Due to unforeseen circumstances Ann Noelle was unable to make the trip, but Carmel and her accordion did travel and we based ourselves in Port Talbot  for the duration.
On the evening of the 15th we were invited to join for rehearsals with the Morriston Rugby Club Male Voice Choir. his choir is one of the top rugby club choirs in Wales, and we were privileged to get an insight into the workings of this prestigious group. After the rehearsal, our chairman Winston Morrison presented their musical Director with some Cavan Crystal, and we all then proceeded to the club bar for a sing song, where we more than held our own. Following this we returned to our hotel and went straight to our beds (what happens in Wales…etc…etc !!)
On the morning of the match we traveled by coach into Cardiff. We had planned to have a group photograph taken outside Cardiff Castle, but having lined up in our choir positions, it was decided to give an impromptu performance! Within minutes an enthusiastic audience had gathered, so we gave Molly Malone, The Fields Of Athenry, and Ireland’s Call, a good airing. Among the gathering was Charlotte Evans of BBC Radio Wales. Charlotte so enjoyed our performance that she started to record us and we aired live on BBC Radio Wales, together with interviews from Carmel, Tom, and Winston. (Hear recording below)

After the Castle performance, we went to a venue in the city centre which had been specially organised for us by Cardiff based Cavan businessman Kevin Cahill. Not only has Kevin organised a special venue but he also supplied free food and drink for the entire evening. Cavan men might be tight when it comes to others, but not when it comes to their own! We really did appreciate Kevin’s generosity and we hope we can repay him some time in the future.

We caught the ferry back to Rosslare on Sunday, and arrived back in Cavan very tired little teddy bears!
This trip was a credit to the organisation skills of our committee and all the members appreciate the work that was put in on their behalf. The entire trip went without a hitch and this was in no small measure due to the detailed preparation and the attention to detail of the committee members involved.

Rehearsals and Sing Song with the Morriston Rugby Club Choir

On the 1st July 2018, the choir were honoured to be asked to entertain the guests at the wedding of Ann Noelle’s daughter Niamh to Iowa native Ryan Lewis. In beautiful sunshine the choir, conducted by Ann Noelle herself, and accompanied as always by Carmel, preformed a selection of some of our favourite numbers on the balcony area of the stunning Cabra Castle Hotel. The happy couple who are based in Washington DC, really appreciated the choir’s contributions to their special day

We travelled to Bangor to take part in their International Choral Festival, which took place in St Comgall’s Parish Centre. We stayed overnight in the Park Avenue Hotel, Belfast, and a very enjoyable evening was spent serenading the locals in the hotel bar.

We were delighted to play our part in the community project by Cavan Institute in this charity single. It was written by Daire O’Reilly and recorded by the Music Production students in Cavan Institute. The single was launched on Friday the 13th of April in the Farnham Arms hotel in Cavan town. All proceeds of the night and the sale of the CD are donated to C.A.P.S. (Cavan Autism Parents Support) as part of autism awareness month.

On the 26th of May 2017, the choir traveled to Castlebar to take part in the Mayo International Choral Festival. We stayed in Breaffy Woods Hotel, and as can be seen from the photos and videos below a great time was had by all.

In 2016 we performed with the Garda Band in the Kilmore Hotel: 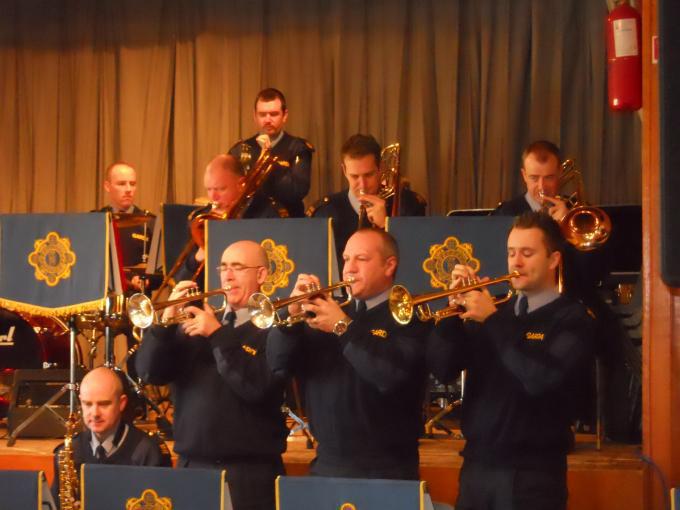 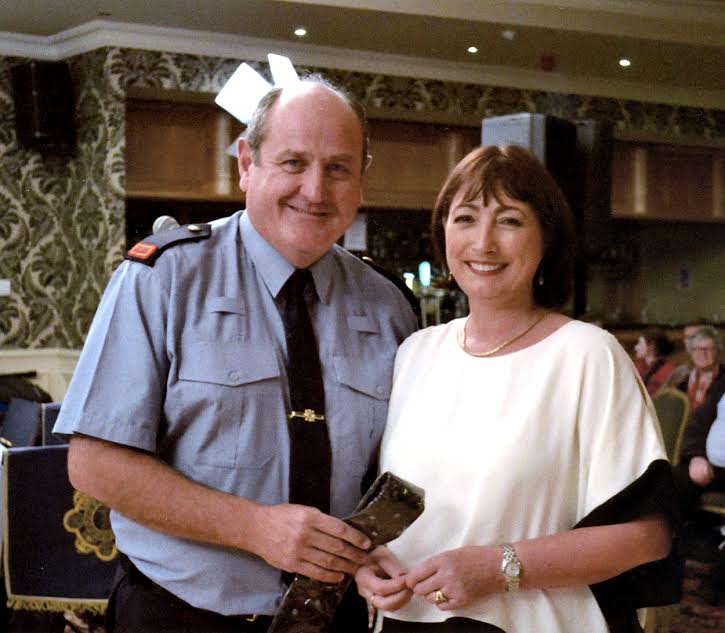 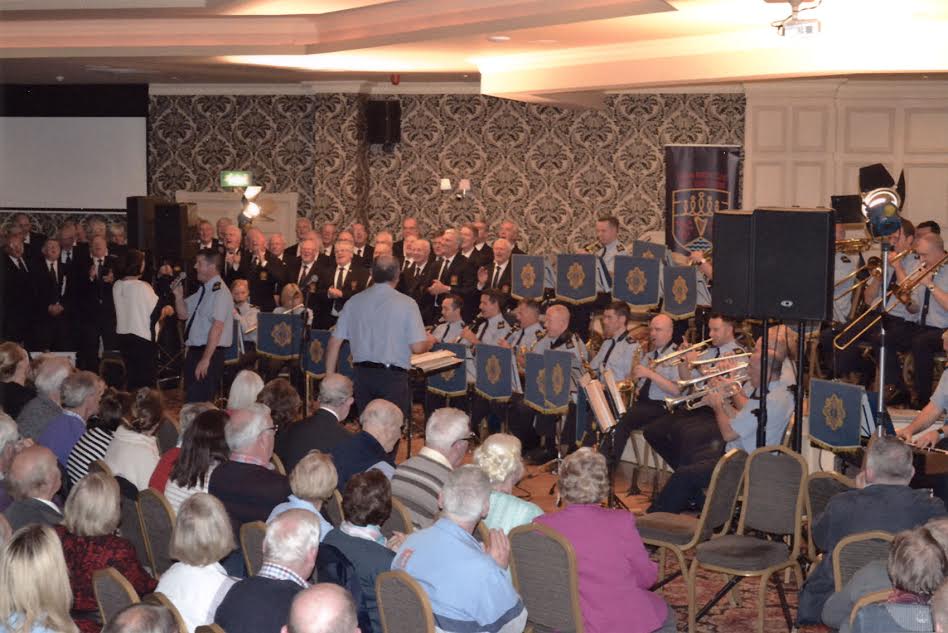 In November 2015, we performed with the Song Sisters at Crover House Hotel: 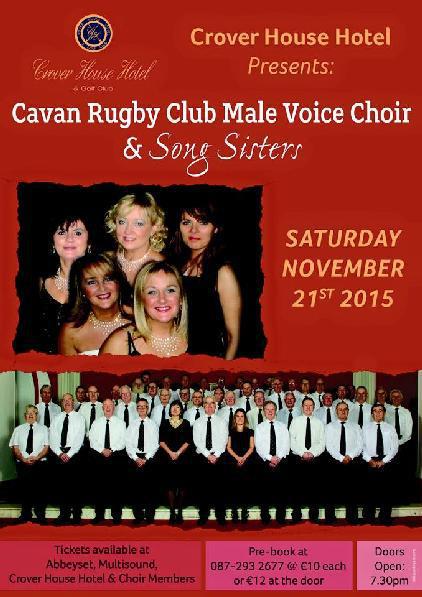 We appeared at a packed Aviva stadium in 2014, where we sang the national anthem, and Ireland’s Call, accompanied by the Garda Band prior to the Ireland V Scotland Six Nations International. This was a great honour and something the choir had been striving towards. It was also our second time to perform at the Aviva. 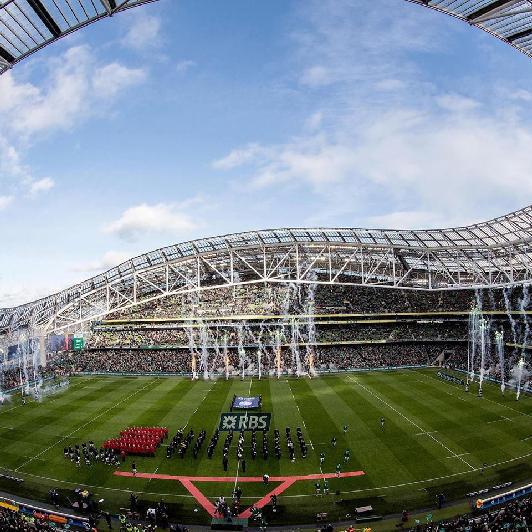 In 2014 the Choir travelled to compete at the Arklow Music Festival, in the Male Voice Choir section, winning the prestigious Naughter Cup, and also winning the Paddy Fitzgerald Memorial Cup (gold medal).

In 2012 the choir entertained the crowd prior to kick off at the Leinster V Cardiff Heineken Cup match, and our version of Molly Malone received a great response from the Leinster supporters. We have also been guests of the Leinster team at the RDS in Ballsbridge.

In December 2015 we performed as guests of the Connacht Rugby Team in the sports ground in Galway for the 4th year in a row. 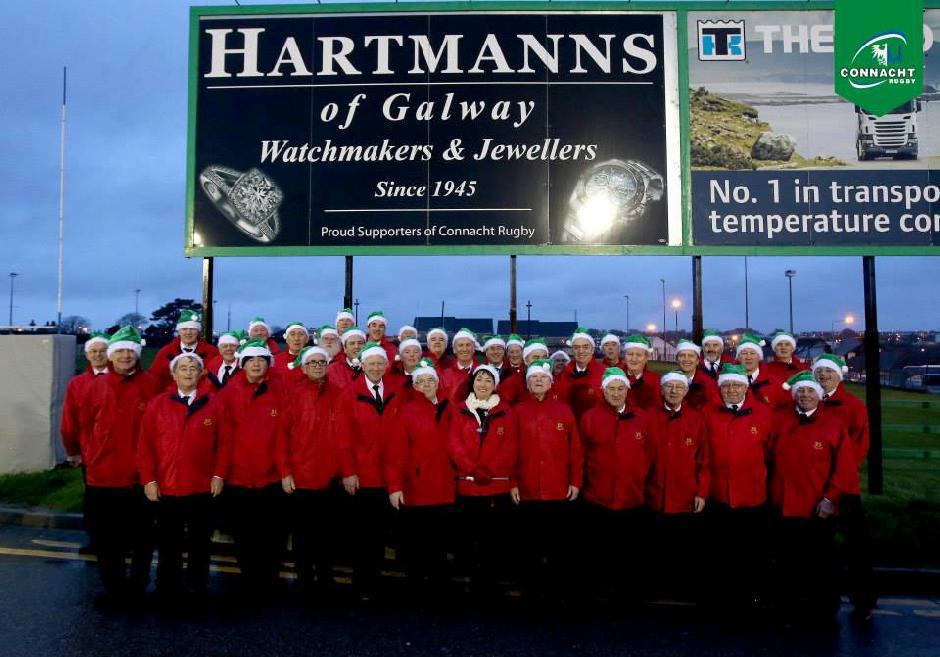 January and May of 2016 we performed at half time at Kingspan stadium Belfast (Raven Hill), while Ulster entertained Leicester Tigers and Munster respectively. 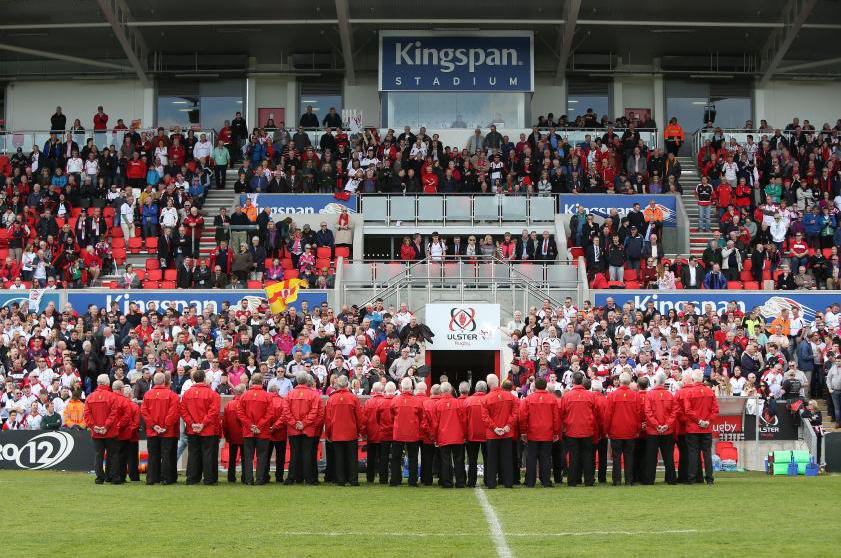 In 2015 and 2016 we hosted the famous Willis Clan from Nashville in two end of season shows in the Kilmore Hotel, Cavan. These two shows attracted huge crowds and were acclaimed for their musical quality and entertainment value. 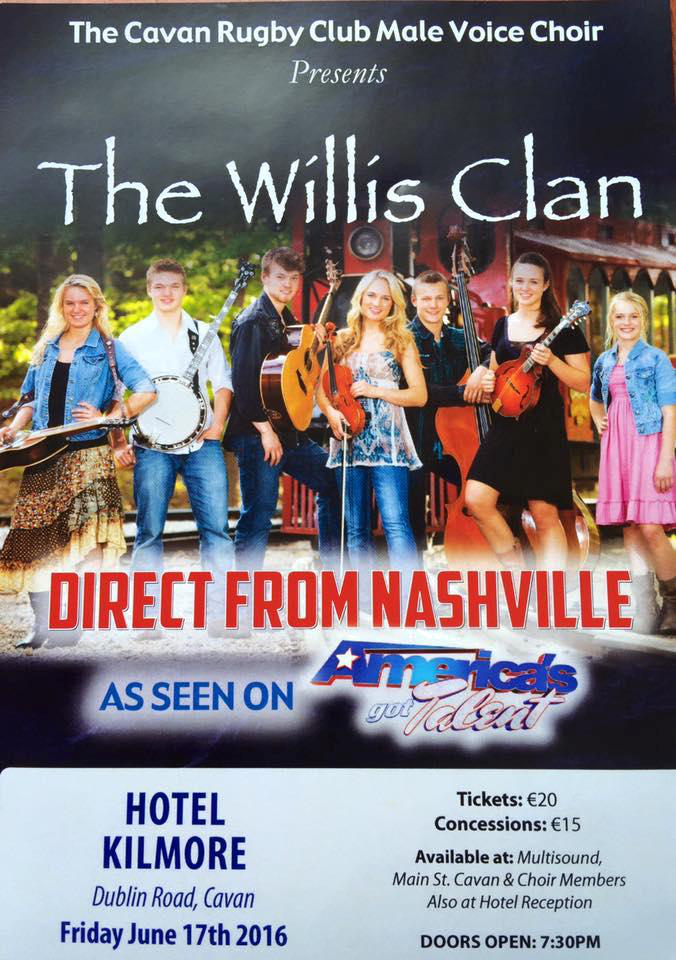 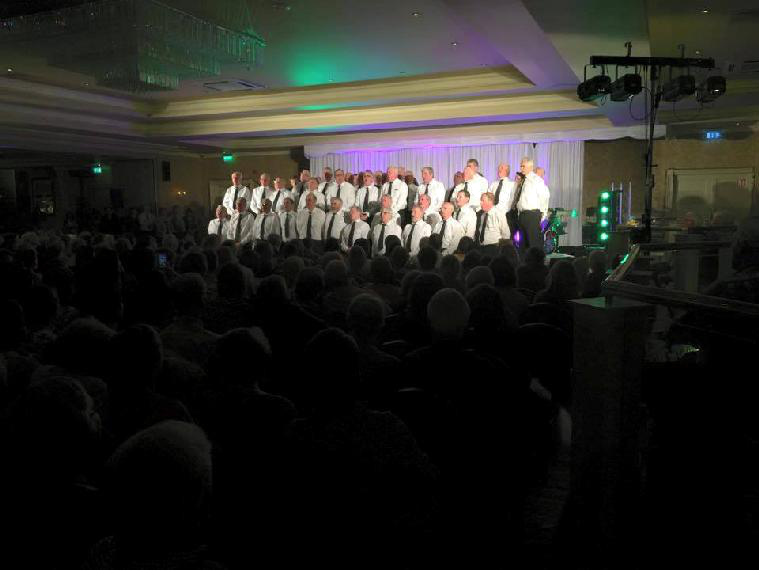 In 2015 we opened for the launch of Earnan Gilleran’s CD “I Seek I Ask” at a concert in the Church of Immaculate Conception Belturbet. 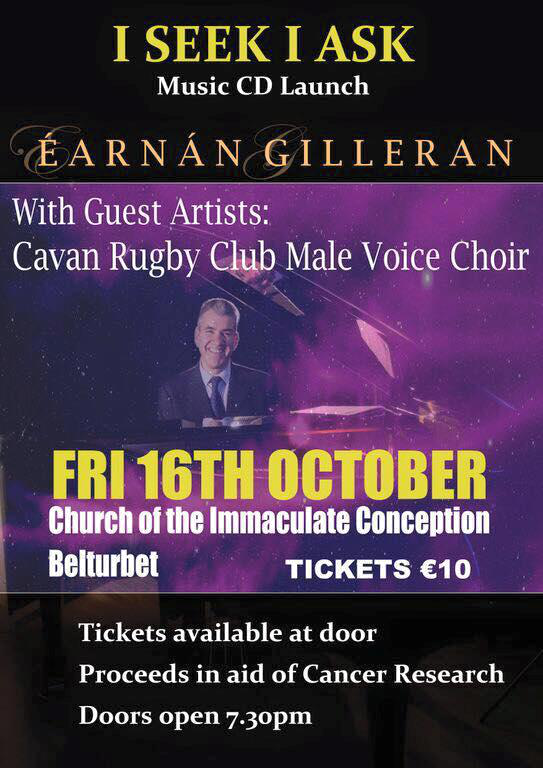 In 2013 we performed a concert with Kathy Durkin at the Ramor Theatre. 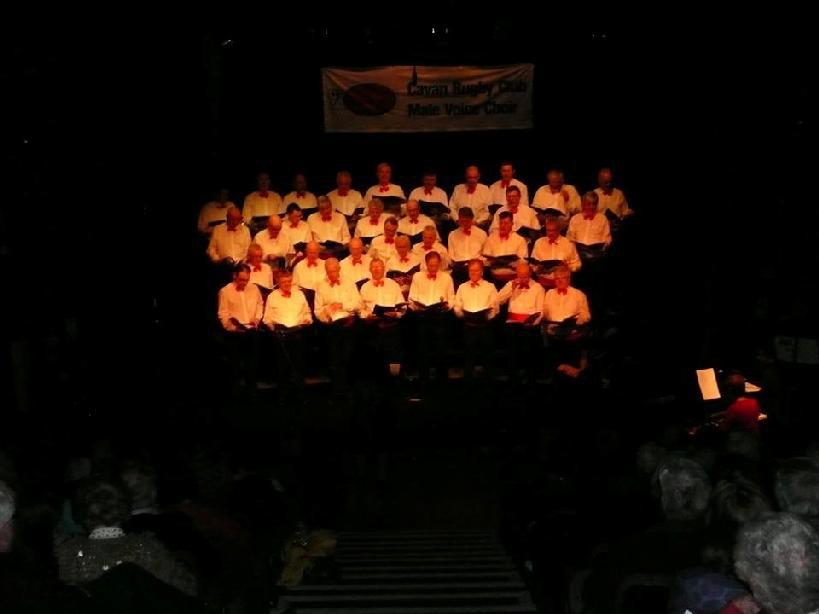